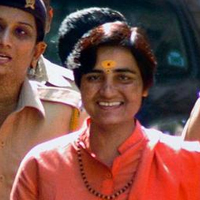 New Delhi, Apr 18: The BJP after selecting Sadhvi Pragya Singh Thakur as its candidate from Bhopal said that the decision was taken to punish the Congress for its Hindu terror bogey.

The Congress said it would request the EC to review its decision, as the campaign did not name any person.

Swami Assemanand is at it once again and this time around he has named RSS Chief Mohan Bhagwat. The accused in the Samjautha Express, Mecca Masjid and Ajmer blasts has alleged that it was Bhagwat who sanctioned these strikes.
The National Investigation Agency which is seized off all these cases is however treading cautiously on the issue. Aseemanand is known to backtrack on his statements and has done so once in the past as well which left the NIA red faced before the court. NIA sources tell rediff.com that they will wait and watch and would not want to jump to any conclusions since these are statements given before a magazine. Not once in our entire questioning of the man has he ever named Mohan Bhagwat and hence there is no reason for us to act suo motu on the case. We will instead wait for a court order and only then act, the NIA official also pointed out.

END_OF_DOCUMENT_TOKEN_TO_BE_REPLACED

The bail plea filed by Sadhvi Pragya Singh will be heard on December 14th by the Bombay High Court. The matter has been listed to be heard at 3 PM.
Pragya Singh Thakur who is currently lodged at District Jail Bhopal under went C. T. Scan and dozens of tests in Jawaharlal Nehru Hospital at Bhopal Madhya Pradesh in the last week, where she is facing the trial in Sunil Joshi’s murder case. END_OF_DOCUMENT_TOKEN_TO_BE_REPLACED