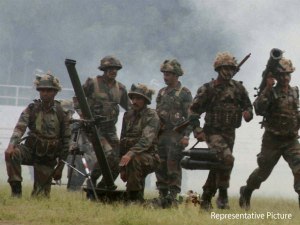 Amidst the Doklam standoff, there has been some build up from the Indian side in terms of troops and artillery. While not specifying why the build up was taking place, the source added that the mobilisation was not unusual. Highly placed sources tell OneIndia that India is ready to respond if they find any unusual mobilisation by China. For now, things stand at a standstill from the Chinese side and they it does not appear as though they are itching for a war, the source also added.

On Thursday the Central Information Commission asked the Government whether the Taj Mahal was a mausoleum or a Shiva temple. The directive was issued on an RTI application which sought the information. This issue has been debated for long a petition a few years back in the Supreme Court too had been struck down after it was said that the Taj Mahal was originally a vedic temple. P N Oak had written a book,

Taj Mahal a true story in which he argues that it was a hindu temple. Let us understand what the entire issue is about and why many have said that the Taj Mahal in reality is Tejo Mahalay. Several sites have posted arguments on why the Taj Mahal was in reality a temple and not the tomb of Mumtaz, wife of Mughal ruler Shahjahan.

A Chinese daily has said that the countdown for a military conflict has begun. This media report comes a day after a senior Chinese official said if the Indians do not leave Doklam, then they could enter Uttarakhand and Kashmir. An editorial in the state-run China Daily today warned India that the “clock is ticking away” and “India will only have itself to blame” if it does not withdraw its soldiers from the Doklam plateau which has hosted a military confrontation between the two countries since the middle of June.

Article 35 A of the Indian Constitution for Jammu and Kashmir is once again in the news with the Supreme Court agreeing to hear a plea in this regard. A plea was filed in the SC seeking the scrapping of the article for the state as it is discriminatory in nature for women who are stripped off the right to own property if they marry someone from outside the state.

India is becoming an intolerant society and there has been a breakdown of Indian values, outgoing vice-president Hamid Ansari said.

Defence Minister Arun Jaitley said that the Indian Armed forces are capable enough to meet any challenge to the country’s security as he underlined that lessons have been learnt from the 1962 war. He also said in the Rajya Sabha that the people of the country have a predominant wish of retrieving the parts of Jammu and Kashmir occupied by Pakistan since 1948.

Y S Rajasekhar Reddy paid money to naxals to kill me, Andhra Pradesh Chief Minister, Chandrababu Naidu alleged. He had a hand in an attempt on my life by naxalites in 2003, Naidu told reporters. This statement was in response to Reddy’s son and YSR Congress president Y S Jaganmohan Reddy’s recent comment about shooting Naidu dead in public for allegedly cheating the people.

Kashmir separatist, Shabir Shah accused in a money laundering case has been sent to judicial custody, Additional Sessions Judge Sidharth Sharma sent the accused to jail after the Enforcement Directorate (ED) submitted that he was not required for further custodial interrogation.

Three terrorists have been killed in an encounter at Tral in Pulwama, Jammu and Kashmir.