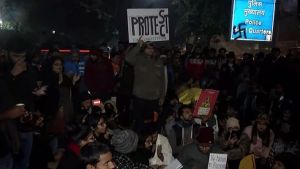 B R Ambedkar had rightly written in 1940 about the weakness of the Congress in its dealing with the Muslim community. He wrote that the policy of concession has increased Muslim aggressiveness.

Bengaluru: From Khilafat 2.0 to Azadi, the protests around the amended citizenship law has seen all sorts of sloganeering.

The Congress has been accused of fanning sentiments in a bid to create fear in the minds of the Indian Muslims claiming that the new law would have a direct bearing on their existence in India. It has been made clear several times that the new law does not affect Indian Muslims and is only aimed at granting citizenship to the religiously persecuted minorities from Afghanistan, Bangladesh and Pakistan.