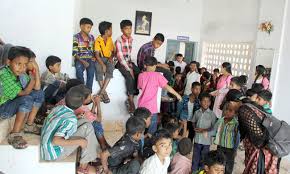 The arrest of Shakeel Ahmed the middle man in the child trafficking case which was busted in Kerala a couple of days in which around 580 children were rescued has turned out to be a boon for the investigating agencies.
He is being grilled by the Kerala police and has said that this is a racket that has been going on since the past decade. There are parents who are vulnerable whom we target. While some of the children were purchased for a sum, there were others who were lured to hand over their children. Some of the parents were told that their children would be taken down to Kerala and provided good education so as to secure their future. The parents bit the bait and even gave us Rs 1500 towards the cost of the education that we had assured them of.

Shakeel Ahmed is one of the many middlemen involved in this inter-state racket which has an international ramification. His job was only to bring the Child down to Kerala and hand them over to an orphanage. Shakeel Ahmed tells the police that he has no idea what happens after that. I was paid for the job and I also got to keep the Rs 1500 that I had collected from the parents, he said.
The Kerala government had said that it would hand over the probe to the CBI. However that has not happened as yet and there appears to be some pressure from political circles to keep the probe within the state. While the teams from the affected states such as Jharkhand, Bihar and North eastern states can only probe the case of how the children went missing, Kerala has a much bigger role in this case.
For the Kerala police this racket just does not end in its state. There is a major Gulf connection to this case and they have ample evidence to show that these orphanages get donations on the basis of the children count they manage to show. Moreover there is also another aspect to this racket in which children are sold off in the Gulf. All this would ideally require a CBI probe and it all depends on the government on how fast they would move.
A year back Kerala had witnessed a case which involved women trafficking. Several women were lured into getting good jobs at Sharjah, Oman and Dubai and they were sold off for Rs 25000 out there.
The child trafficking case has got a lot of attention and the Kerala government is under pressure to act despite the IUML claiming that it is a witch hunt against the Muslim community. The Kerala High Court had come down very heavily on the government and called it a matter of shame. The court observed that the government was dragging its feet and taking the matter too lightly despite so much being said about the case. Even the Bihar and Jharkhand governments have expressed their displeasure with the Kerala government in this case, the court also observed.

4 thoughts on “Child trafficking- How they did it?”