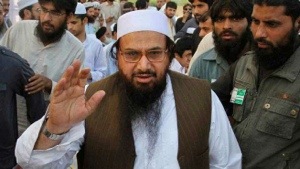 In the backdrop of increasing violations along the Line of Control, Intelligence Bureau officials point out that Hafiz Saeed the, Pakistan’s most notorious jihadi and Lashkar-e-Tayiba leader has ordered an all out war on India.
An Intelligence Bureau report states that Saeed who spends most of his time on the Pakistan side of the LoC is trying to ensure that at least 800 infiltrations take place before the year end. He was seen urging jihadis on the border to wage a war against India four days back and the intercepts suggest that Saeed spends nearly 5 hours a day at the Lashkar camps along the LoC.

Blessed with the support of the ISI, Saeed has off late been getting into an aggressive mode on the Kashmir battle. Following the attacks of 26/11 there has been a lull in the activities of the Lashkar and the growing un ease amidst its forces is being seen as a major reason for such aggression.
The deal that has been struck between the ISI, Pakistan army and the Lashkar is clear. Each one has a part to play and the government in Pakistan has been reduced to a dumb spectator in all this. Nawaz Sharrief has been urging an intervention into the Kashmir issue and these statements clearly tell the pressure that is building up on him.
While the ISI has been behind the strategy, the Pakistan army has been aiding the infiltrations through distraction fire. Along the border camps of the Lashkar there are nearly 800 jihadis who are ready to infiltrate. Saeed has been told that all of them who are jihad ready need to cross over at any cost and take position in the Valley. The ISI wants to ensure that the issue of Kashmir flares up in a big way and an all out proxy war ought to be fought on behalf of Pakistan by the Lashkar. They want to focus more on the Kashmir issue as they want to further their policy, an officer with the Intelligence Bureau told rediff.com.
C D Sahay, former chief of the Research and Analysis Wing says that the entire battle is under the control of the Pakistan army and the ISI. Even at times of peace and calm activity in the camps of the Lashkar continue to take place. This is no indication of peace he points out. The same had occured during the time of Pervez Musharaff too.
The ISI has been sensing an Indian victory in Kashmir and hence has decided to up the ante. Indian authorities are trying to bring back mis guided Kashmiris who had once trusted Pakistan and left India to fight along side them. Today these persons are out of job and want to desperately come back to their loved ones. India has been trying to get these persons back. These persons have realised what Pakistan’s real agenda is and do not trust them anymore. There are close to 2000 such persons. India will ensure that they return and would be kept under watch. India feels that such persons would be indebted to the country and also provide the agencies with vital information.
This has not gone down too well with Pakistan who feel that the battle is going out of their hand. Moreover there is a lot of disgruntlement among the jihadis as a result of which recruitments have gone down too. Such activity and a strong anti India policy has always helped the Lashkar and the ISI.
IB officials warn that the days to come would see more incidents along the border. It is a war like situation over there. Infiltrations are taking place apart from the routine pumping in of arms, drugs and fake currency aimed at making a mess out of India, officials also say.
India may take up the issue with the Pakistan government but every report and intercept available with the Indian agencies suggests that there is nothing in the hands of the democratically elected government. It is the three wings of Pakistan- ISI, Lashkar and the army which are calling the shots.