New Delhi, Apr 11: The National Investigation Agency has learnt that a Bangladeshi national who entered Assam illegally was trying to set up an Al Qaeda module in eastern India.

On Sunday, the NIA conducted raids at 11 locations in Barpeta and Bongaigaon districts of Assam in a case linked to a module of the Al Qaeda in the Sub-Continent (AQIS).

New Delhi, Jan 04: The Indian Army has foiled an infiltration bid by terrorists from Pakistan at the Bhimber Gali Sector.

The subsequent search conducted after the bid was foiled led to the recovery of ammunition and Pakistani currency left behind by the fleeing terrorists. Indian Army is vigilant and alert to the nefarious designs of Pakistan sponsored terrorists and determined to thwart any such attempts, PRO (Defence), Jammu said in a release.

New Delhi, Oct 16: The Jammu and Kashmir has killed 13 terrorists since the killing of civilians in the Valley. The police said that the 13 terrorists were killed in 9 encounters.

The police said that following the killing of civilians, 3 out of the 5 terrorists of Srinagar city were killed in less than 24 hours.

New Delhi, Oct 13: A terrorist of Pakistan nationality associated with the ISI who was arrested in Delhi was planning terror attacks during the festive season, the preliminary investigation has shown. An AK-47 rifle and other firearms had been recovered from him.

The police said that Mohammad Ashraf alias Ali was living in Delhi as an Indian national with the name Ali Ahmed Noori. Pramod Singh Kushwaha, Deputy Commissioner (Special Cell) said that his team had recently received inputs that a Pakistani national, who lived in east Delhi was impersonating as an Indian citizen. He was then traced to Laxmi Nagar and later arrested.

New Delhi, Sep 28: A Pakistani terrorist has been captured, while another has been killed during a counter-infiltration operation in Uri, Jammu and Kashmir.

Sources tell OneIndia that the incident took place along the Line of Control in Uri.

Earlier this month, a second attempt to infiltrate terrorists into Jammu and Kashmir was made.

New Delhi, Mar 22: Three terrorists were gunned down by security forces in an encounter in Jammu and Kashmir’s Shopian early this morning.

Sources tell OneIndia that the terrorists were killed following an encounter that took place at around 2 am at the Manihal area in Shopian. After receiving information about the presence of terrorists in the area, an operation was launched by the Jammu and Kashmir police, Indian Army and CRPF.

New Delhi, Oct 29: The unified command of the security forces has decided not to scale down counter-insurgency operations in Assam and the adjoining states. This despite the situation in the area witnessing a significant improvement in terms of law and order.

There is an apprehension that the Chinese are trying to instigate insurgent groups of northeast. It may be recalled the the Global Times had said that if India plays the Taiwan card, China should help militant groups of India to retaliate.

New Delhi, Sep 27: Almost all top terror groups in Pakistan have activated their modules, training camps just to name a few. However, over the past couple of weeks, the Indian intelligence has been picking up information about the opening up of the aquatic training centres of both the Lashkar-e-Tayiba and Jaish-e-Mohammad.

It was back in January that the Intelligence had first signalled that Pakistan is urging its terror groups to go ahead with Operation Samudari. Officials tell OneIndia that terror groups would look to use various techniques as the land is becoming difficult to access owing to the huge security build-up. 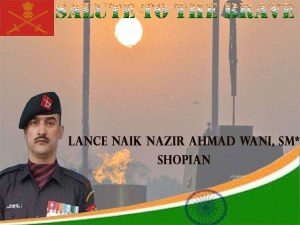 New Delhi, Jan 24: The Ashoka Chakra, India’s highest peacetime gallantry medal will be awarded posthumously to Lance Naik Ahmad Wani, who laid down his life during an anti-terror operation at Shopian in Jammu and Kashmir last year.

Srinagar, Dec 28: A little over 250 terrorists have been killed in Jammu and Kashmir in 2018 alone. The reason behind this astounding success was thanks to the launch of ‘Operation All Out’ by the Indian Security Forces.