The return of Areef Majid is a shot in the arm for the Indian agencies fighting the ISIS threat. What Majid has been saying since his return needs to be a message for every Muslim youth who thinks the ISIS is perfect. When he signed up for the ISIS not once did he expect that he would end up as either a scavenger or a man who arranges women for the ISIS thugs. There is no doubt that the ISIS wants Indians, but then they sure don’t need them on the battle field since they are highly incapable
Read more 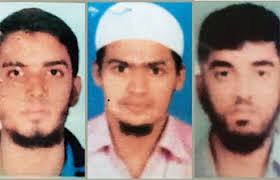 It is just a matter of time before three youth from Maharashtra who left to join the ISIS in Iraq and Syria reunite with their families. These youth, who have been in contact with their families since Sept 2014, had expressed their willingness to return.
Sources in the Home Ministry tell Oneindia that these youth had been showing intent to return since the past two months. They were unhappy over there and felt that the kind of battle being waged was not their cup of tea.
Read more

Arif Ejaz Majeed, one of the four youth from Kalyan who joined the ISIS in Iraq was killed allegedly by an air strike. While this information was confirmed to the family by  an associate of his by the name Shaheen Tanki, the internet is filled with homage for Majeed who already has been termed as a martyr.
A couple of hours after his death there were several who had posted on various forums online about Majeed becoming a martyr for the cause.

END_OF_DOCUMENT_TOKEN_TO_BE_REPLACED

There is a lot that has been spoken about the recruitment of the 18 Indians into the ISIS. It started at Chennai and then led to Kerala and finally found its roots in Maharashtra. Based on the inputs shared between the Indian and Iraqi intelligence the information that they have got now is that these four boys from Kalyan are in Fajullah and had entered into Iraq a month back.
The IB has also alerted the Kalyan police to find a person residing at the Padgah-Borivli area who had helped these youth leave India for Iraq. We are still trying to ascertain the role played by this businessman who helped these boys. The boys had saved up some money to reach, but this businessman who helps Saudi based Wahabis transfer funds into India could have lent monetary assistance to these boys. This business man like several others act as a front for the funds from the Wahabis in Saudi Arabia to come in. This money is used to bribe the administration of Mosques visited by the moderates so that they could take over the same. The money also goes into holding seminars and if the need be send youth to different countries if they want to take part in some cause which upholds the preaching of the Wahabis.