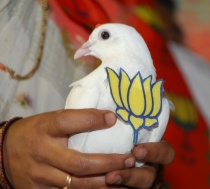 A visit to Bellary and you would no longer call it the Republic of Bellary what it used to be known as early as three years back. The campaigns are mellow and the flamboyance is clearly missing. The reason is simple- “ the collapse of the Mining Lobby.”

It always was a battle between the members of the mining lobby in Bellary, but this time the BJP in particular has ensured that it does not field a candidate with this background. Although the same could not be said about the Congress which finally gave way to Anil Lad whose name figures in the illegal mining report by the Lokayukta of Karnataka.

The Reddy brothers- Janardhan, Somashekhar and Karunakar were the ones who controlled Bellary. They ensured that their party won by hook or crook in Bellary district. They also had a huge influence over the voters in the neighbouring places such as Gadag, Koppal, Raichur and also Haveri. This time around that show is not there for various reasons. Janardhan Reddy is in jail, Somashekhar Reddy has gone quiet after the judge bribing scandal and Karunakar Reddy has moved to Davangere to fight as a loyal BJP man.

The absence of the Reddy brothers in Bellary has helped the BJP clean up its dubious reputation in this area. However this comes at a price since their poll prospects look bleak. The drubbing they got in the by-elections and also in the Urban Local Body polls is only an indicator to what the BJP has in store in Bellary.

The problems for the BJP have further worsened with the exit of B Sriramulu. He was a key member of the BJP and ensured a victory in Bellary rural every year. However this time around he has floated his own party, the BSR Congress and going by the trends, he looks like he will pull through. This would mean a seat less for the BJP in their once powerful bastion.

The mining lobby may be down, but that has not stopped candidates from filing their nominations. Take the case of Bellary city- there are 29 candidates in the fray. This may believe is due to the thought process that people are looking for a change in Bellary and hence they believe that everyone is up with a chance.

Some candidates say that it was impossible to fight an elections when the Reddy brothers were around. They were aggressive and had money power to win an election with ease. They were so confident that they openly threw challenges to their opposition to come to Bellary and contest.

All that today is missing and the fact that the BJP did so badly with these brothers in the picture was evident during the urban local body polls and also the by-election in which the BJP candidate lost his deposit even to Sriramulu.

Bellary has a total of 10 urban bodies and the Congress managed to win 7. This meant that they won in 136 wards in this years Urban Local Body polls as compared to the 66 in the previous elections.

The Sriramulu factor- Once a part of the Reddy bastion and a BJP minister, Sriramulu quit the party and formed the BSR Congress party. While this was a big blow for the BJP, it did not mean that it was advantage BSR Congress. Sriramulu is a strong candidate no doubt and he will win since the people of his caste will vote for him. However the same cannot be said about the rest of the Bellary constituencies from where his party is contesting. In the Urban Local Body elections. It managed to win just 51 out of the 240 wards in Bellary.

However Sriramulu’s party could prove to be a headache for the BJP. Even if the party does not win the elections, it would still take away a considerable share of the BJP votes. In such an event it is the Congress which would gain.

The Congress at the start of the Bellary elections had an advantage. Their unit in the district was disintegrating, but after the resounding success in the Urban Local Body elections, they stood united. Although the Congress would gain in Bellary, they would face a lot of hurdles as there are a great number of Congress workers who were not happy with the ticket distribution process. They had complained about giving mining baron Anil Lad a ticket and this has resulted in a split campaign in Bellary.