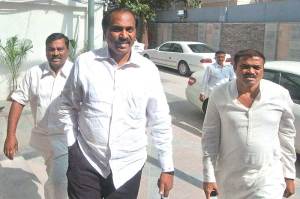 When you read the report on illegal mining prepared by the Karnataka Lokayukta and his team you get the larger picture. While the entire state focuses on the political ramifications of this report, the report per se speaks in great deal about how the Reddy brothers have under invoiced their iron ore exports to Singapore and have also parked money in tax havens abroad.

A chapter in the mining report stating “ Under Invoicing, Evasion of Taxes and Duties by Obulapuram Mining Company has this interesting story to tell about how 215,12,50,357 has been parked outside the country by the Reddy brothers. Further it also negates the claim made by the Reddy brothers themselves that they have no mining interest in Karnataka.
M/s. Obulapuram Mining Company Private Limited (OMC), Ennoble House, Raghavachari Road, Bellary had the following Directors at the relevant time- G. Janardhana Reddy, G. Lakshmi Aruna, G. Karunakara Reddy, D. Parameshwara Reddy, B. Sree Ramulu.

The report further states that a private company by the name Man-Go Pub Pte Ltd was registered in the year 2004 at Singapore and the purpose of this company was to provide entertainment, food and

Beverage. In the year 2007 there was a special resolution passed in which the principal activities of this company were also proposed to be changed from restaurant Bars and Canteen to general whole sale trade including general imports and exports. Janardhan Reddy was appointed as Director of this Company. One share of this company i.e. GLA was transferred in favour of GJR Holdings International Limited with its address at Isle of Man on December 21 2007 and same transaction was lodged with ACRA on January 4 2008. Again it should be noted that the letter GJR in this company refers to Gali Janardhana Reddy and the company is registered in Isle of Man, which is our internationally known “Tax Heaven”. The said share was further transferred in favour of Interlink Services Group Limited, British Virgin Islands in June 2009. The British Virgin is also known to be a “Tax Heaven”. The role of GJR Holdings International

Limited and Interlink Services Group Limited under the above circumstances, requires further probe by the competent authorities.

It is to be noted that after the enquiry into the illegal exportation was initiated by Lokayukta, Janardhana Reddy ceased to be the Director of the above Company with effect from 30/12/2009 by resignation.

During the period when Sri G. Janardhana Reddy was the Director of the Company, the GLA Pet Limited had imported iron ore to the tune of 8,52,033 MTs from OMC, Bellary the origin of the ore is shown at Ports from Karnataka. There was no export of iron ore, before or after the period when Gali Janardhana Reddy was the Director of GLA, from OMC. This is seen from the export data obtained from Customs Department.

An assessment order shows under invoicing of cost of iron ore, export sales to GLA Trading International Limited, Dubai by OMC.  It may be seen for the purpose of understanding the modus operandi of OMC in exporting the iron ores. The said assessment order clearly makes out a case of relationship between the OMC and GLA Trading International Limited, Dubai.

The Lokayukta report provide details of under invoice made by OMC for the year 2007-08 as assessed by the Income Tax Department, which is huge. Having noticed the details of export of iron ore made by this company (OMC), all details of export of iron ore was sought from the Customs Department 0f Kakinada, Krishnapatnam, Vishakapatnam, Chennai, Mangalore, Belekeri, Karwar, Murmagao and Panaji. The details are further verified by the investigation team with regard to GLA as consignee. The details of Mangalore Port has not been taken into consideration, since there is not much difference found during the month of October 2008. The details received also shows that there is no export from Belikeri, Karwar, Murmagao and Panaji ports by OMC to GLA. However, the Customs House, Kakinada has given information/particulars of export made by OMC to GLA, Dubai. It is interesting to note that most of the exports were shown as originating from Karnataka.

Similarly, the report pertaining to Krishnapatnam, Vishakapatnam Ports also indicates such exports.  OMC has exported 8,09,299 MTs (excluding exports from Mangalore) to GLA in the year 2007-08 and 2008- 09.

It is also to be noted that the foreign exchange involved in this case, has not come to Union of India and indicates that this amount might have been parked in some Banks in Tax Heaven countries. Therefore, it is necessary that the competent department should be asked to investigate as to where this money is parked and approximately a sum of Rs.215,12,50,357.00 which should have been profit of the Government from OMC and consequent to evasion of Customs duty, Income Tax and other Taxes should be investigated and collected by the respective department, the Lokayukta has recommended.