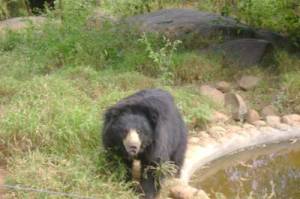 They are not meant to dance or smoke cigarettes so that some heartless Kalandar can earn his bread and butter. Speaking of Kalandars and bear dances this is now history. Just five days back, Raju the last dancing bear in India was rescued from Belgaum, Karnataka and brought to the Bannerghatta Bear sanctuary.
Wildlife SOS, which has been undertaking this operation country wide has a centre in Bangalore. At the Bannerghatta national park they run a bear rehabilitation camp which at the moment houses around 90 bears of whom have been rescued from the Kalandars across the country.
Raju the last of the dancing bears currently is in the camp and one must say there is both sorrow and joy when one sees him. We feel happy that he is out of that horrible world that he was in and the sorrow is when sees that very obviouos trauma that he has gone through. His nose has been injured and he is extremely dull. The people at the camp say that he is yet to get used to his new environment and there is another 3 to 4 months before the acclimatizing process comes to an end.
Each bear in the camp has a story to tell. Dr Yaduraj of Wildlife SOS who took us around the camp says that there are various levels before a bear is completely fit to roam around with the other bears in the sanctuary. After the bear is rescued he is brought to the camp and first quarantined. Most of these bears suffer from various ailments and TB is most the common. Once he is treated, he goes through the acclimatization process. He is kept in isolation in the beginning and only after a couple of months is he allowed to meet with the other bears in the camp. Each bear has a different nature. The new bears are first allowed to mingle with the friendly bears. Once they get used to the company, they are permitted to mingle with the rest of the bears. This process goes on for a couple of months and only once they are fully ready, they are sent to the bear sanctuary along with the rest of the bears.
The transition is amazing. It breaks your heart to see a bear that has just been rescued. However once they are allowed to mingle, the bears are more active. They are friendlier towards the other bears and are responsive when you call out to them. However the real achievement is when these bears are sent to the sanctuary. One could say that they become bears once again and all the natural characteristics are visible. A jeep filled with watermelons makes its rounds through the sanctuary and this exercise is known as fruit feeding. As we drive through the sanctuary, these bears recognize the sound of the jeep and just out of no where the entire road is filled with the bears who come running to the jeep. We are asked to lower the windows since most of these bears stand right up to you in the anticipation that we would be feeding them today. However once they are given their watermelon, they don’t appear to be bothered about your presence. The characteristics too are very natural once in the sanctuary. They are pretty aggressive and there is this regular fight among each other for space, which is only an indication that they have become bears again after suffering all these years of trauma at the hands of the Kalandar.
Dr Yaduraj says that it is quite a process and they have to deal with them with extreme care. We ensure that the bears forgets everything about his past and we also give it new names other the one which was given by his Kalandar or handler. Some bears adopt very quickly but there are others who take a while longer. Even the feeding pattern we are particular about. Most of these bears come here with no teeth since they are pulled out. We give them a lot of porridge and once they become normal, they are given fruits, he says.
The Bannerghatta bear rescue centre is one of the four centres which has been set up by Wildlife SOS in association with Free the Bears Fund from Australia, Britain’s International Animal Rescue and One Voice Association from France.
Rescuing these bears has not been an easy task. Most of the Kalandars were promised that they would not be arrested if they came up voluntarily and handed over the bear. Raje Saab, the handler or the Kalandar of Raju was given Rs 50000 to give up the bear. This money was given so that he could start a new life. He says that he is happy that he could give up the bear to a place where he would be taken care of. I can now start my life afresh with the money I have been given, he says.